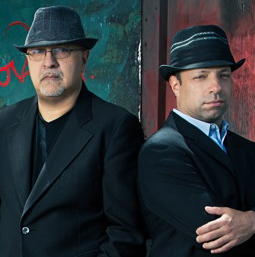 SCGC: Did you have a personal reaction to the project?
AB & AP: As a Canadian, to learn about how Camp X in Whitby Ontario was instrumental in training intelligence to defeat the Nazi regime was quite a surprise. The series has great stories of Canadian heroism and devotion. It’s very inspiring.
SCGC: What was the biggest challenge you faced during this project?
AB & AP: Coming off the success of Flashpoint, we were for a short time labelled as the “cop show” people. So we had to do more sketches and demo pieces than usual just so that all the decision makers were assured we had the musical range to handle a period piece like this.
SCGC: Describe the process of developing the “sound” of the score and choosing instrumentation.
AB & AP: The sound of the show walks the line between traditional and modern. Besides a large array of strings and pad textures, we have also found some solo colours that lean more towards ethnic or even very synthetic. An early Ondes Martenot sound as well as many Dulcimer sounds, guitar techniques and ambient piano varieties are working very well even though we’re portraying Nazi Germany in the 1940’s.
The budget only allows for a couple of live players but we use them where it makes sense. We’ve worked with cellist Kirk Starkey, singers Karen Leblanc and Shira Zionce, trumpet player Chase Sanborn, drummer John Obercein, and accordian player Tom Szczesniak.
What makes this score unique?
AB & AP: Musically we’re connecting emotionally to characters from the past but using sounds and progressions that are meant to resonate with a modern audience.  The show creators right from the get- go always said that this is a period piece, but it has to feel like now.
Was there anything different about your approach to using music and adding it to picture for this score?
AB & AP: One interesting aspect of the score turned out to be the phenomenon of synesthesia. One of the main characters Alfred, (played by Jack Laskey) has a condition where his senses are crosswired so that different keys of music are perceived as different colours in the mind. Orange is Eb major, Blue is A minor.  Also, words have a taste, each day of the week has a texture etc. Some of us on the music team, and in production, have actually experienced this condition in real life. You can imagine that this has made for some very interesting conversations and fuelled some unusual music writing. The episode we’ve been nominated for depicts a team mission that takes place on Hitler’s birthday.  Alfred becomes catatonically frozen at a critical moment when fireworks are erupting in the streets and every flash of colour in the sky overwhelms him with a different musical key. It took a lot of hours but it was fun to create music for this phenomenon. And if you check the episode frame by frame it is accurate in that someone with synesthesia would experience this very same effect consistently.
SCGC: What was your favourite part about working on this project?
AB & AP: Collaborating with the show creators Stephanie Morgenstern and Mark Ellis, as well as the producers, editors and sound team has been a true joy. We’ve rarely had so many people onside with a clear vision of what the show needs. We get to have many face to face meetings that are energizing, respectful and challenging. Of course we get notes and revisions but we’re also allowed input and discussion on what we feel is right for the show. It’s quite liberating and we think that comes through in the music.
Have a listed to some of the music from the nominated series “X Company”:
Musical Examples, Amin: http://aminbhatia.com/music/
Music Examples Ari: http://www.arimusic.com/samples/x-company/
Photo Credit: Rob Waymen
#CSAwards #CdnTV #XCompany #eyeoncanada #nominees #Composers #interview #CdnScreen16