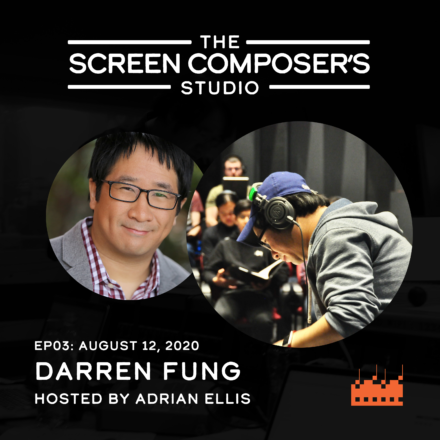 In this episode, we speak to Darren Fung.  Born of Chinese immigrant parents, he started his musical education at a very early age, and had his first orchestral work performed when he was only 15.  He eventually found his way to Montreal where he studied at McGill University, and finally to LA where he currently makes his home.  All along the way, this savvy entrepreneur has found himself helped by many amazing mentors, and has himself long been giving back to the community that helped him get his start.  His stunning work on Niobe Thompson’s The Great Human Odyssey and Equus: Story of the Horse won him Canadian Screen awards in 2016 and 2019, and he has led orchestras across Canada in highly acclaimed concert performances of both mini-series.  We chat about the intensity and pressure of live orchestral recording sessions and what it takes to pull them off, his work on a piece of music that could have made him the most hated man in Canada, the journey that led him to Hollywood, and his thoughts about living and working in the mecca of filmmaking and music.

Please be warned – this episode does contain some spicy words, so be aware if you’re listening with kids or anyone sensitive to not-so-safe-for-work language.