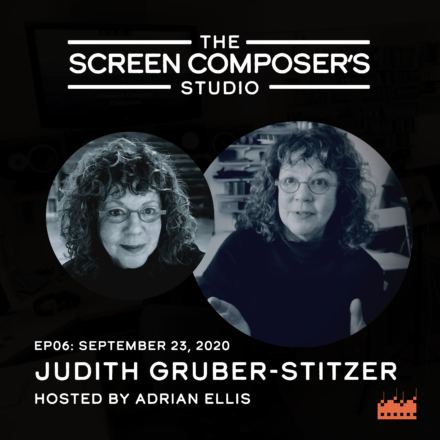 Judith Gruber-Stitzer is featured on this week’s episode of ‘The Screen Composer’s Studio’. You can find the show wherever you get your podcasts!
Judith Gruber-Stitzer is wonderfully articulate about just how music affects moving images and narrative, and yet her approach is often very intuitive. She started her journey in New York and Jersey learning harmonies by ear from her brother’s Doo-wop group before moving to Montreal to work with poet-singer Marie Savard and the band Wondeur Brass. She eventually became one of the National Film Board of Canada’s most prolific composers, scoring Oscar nominated films Animal Behaviour, Wild Life and When The Day Breaks (which also own the Palme D’Or at Cannes), among many others. Judith is quick to point out that she does more than animation, and indeed her resume boasts many live action projects including two films by the legendary Robert Altman. We discuss her work with that iconic director, as well as her perspectives on working both as a composer and sound designer on projects, her take on how rhythm affects audience perception, and what it means to be a woman in an industry still dominated by men.
https://www.buzzsprout.com/1155269