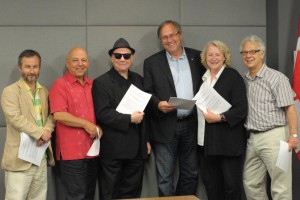 The arrangement, which is the result of a more than one year discussion between the two Guilds, will allow for a new membership category in the Directors Guild of Canada for “Screen Composers”. The Directors Guild expects to open negotiations with the Canadian Media Production Association aimed at securing a basic collective agreement for Screen Composers with Canada’s independent private sector producers.