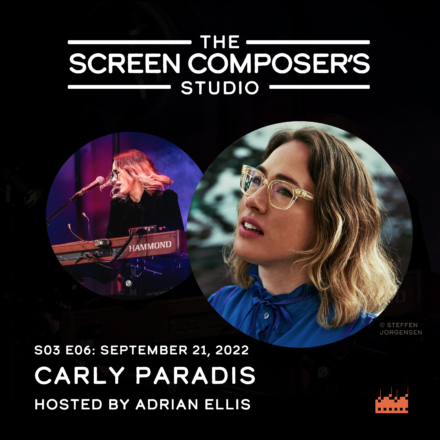 Originally from Hamilton, Ontario, Carly Paradis has made a name for herself as a first call screen composer, scoring huge TV hits such as the BAFTA nominated Line of Duty, Sick Note, and Netflix’s The Innocents.

After a stint in Toronto’s burgeoning indie rock scene in the mid-2000’s, a cold email to Clint Mansell on Myspace turned into an opportunity to work with the famed composer on his score for Moon, and to tour in his ensemble.

This led her to making London, UK her home base, and from there she has built an enviable career writing for top shelf film, TV, and trailer projects. She also finds time to write and produce her own albums, including her latest, Nothing is Something, and most recently, Carly has been playing keyboards for Nick Cave and the Bad Seeds on their European tour.

We chat about her minimalist studio approach, surviving the pandemic, her art school and songwriter roots, working with the London Contemporary Orchestra, her work on the massive British hit and cultural touchstone that is Line of Duty, how she funds and creates her ambitious albums, using unsung, imagined lyrics to guide her scoring, and much more.