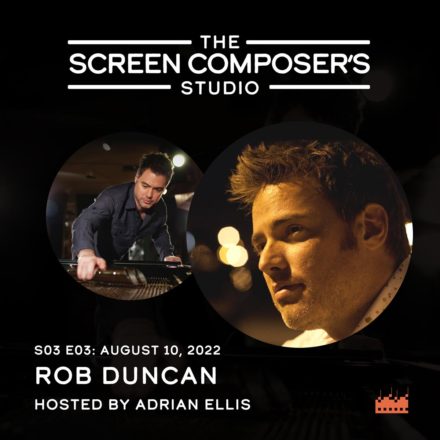 At the tender age of 11, Rob Duncan took apart a piano as part of an experimental music class.  This must have been a spark that lit something in him, as he is now known for recording scores on decommissioned nuclear submarines, finding his next instrument in a junkyard, or being asked by a producer to write a theme using a toilet.

Though he was equally interested in computer animation, he ended up pursuing music at York University, and worked writing jingles before making the jump to Los Angeles, where he landed his first breakout gig: writing the score for the final season of the cult-hit Buffy the Vampire Slayer.  Since then, he has firmly established himself as a go-to TV composer, and has written hours of music for shows such as Castle, Timeless, and S.W.A.T., garnering 4 Emmy nominations along the way.

We chat about the importance of mentors, the responsibility a composer has for the emotion of every chord, the incredible lengths one sometimes has to go to to nail a show’s theme, trying to achieve work-life balance, the beauty of imperfection in sampling, and how he has managed through some of his biggest career ups and downs.