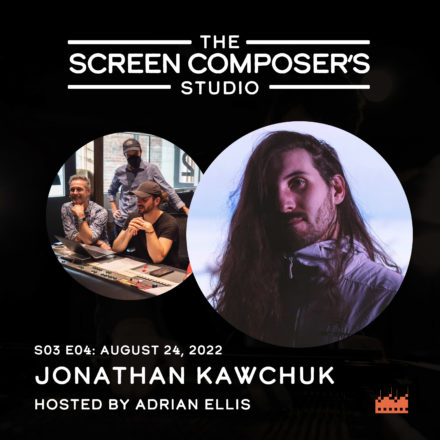 Alberta-born Jonathan Kawchuk is interested in where and how we live as a means to give his music context. He completed a Bachelors of Music at the Liverpool Institute of Performing Arts, worked with Nico Muhly, Ben Frost, and the Philip Glass Ensemble, as well as studying wildlife field recording with Chris Watson.

The idea of the environment, and sound arising from that environment as well as how his own music interacts with environments, is a theme that has permeated his music over the course of several albums. The most recent, Everywhen, takes his ideas to the most extreme, allowing for only 3 sound sources – the human voice, sine tones, and the sound of the Kananaskis Rockies. The resulting work, which required pre-market software to fully realize, was mixed for Dolby Atmos and uses no compression, EQ, or reverb. In his film work, which includes NFB feature Memento Mori and the indie hit Clara, he is equally daring.

We chat about the incredible (and unintended) technical complexity of creating Everywhen, his interest in environmentalism, athleticism, exhaustion, and fear in his music, his recent score for Niobe Thompson’s documentary, Carbon: The Unauthorized Biography, and the bridge he navigates between being a recording artist and screen composer.