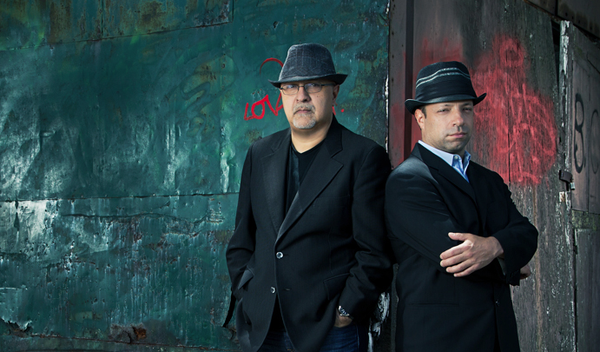 SCGC member Janal Bechthold catches up with the Canadian Screen Award nominees Amin Bhatia and Ari Posner to give you a little look into their process of scoring for the TV series, X-Company. This is their second nomination, having received a Best Original Score nomination for the series in 2016.

X-Company is an “emotionally-driven character drama, set in the thrilling and dangerous world of WWII espionage and covert operations. It follows the stories of five highly skilled young recruits.” ~CBC.ca

SCGC: How is the premise of X-Company meaningful to you?
AB & AP: As a Canadian, to learn about how Camp X in Whitby Ontario and our  intelligence forces helped to defeat the Nazi regime was very inspiring. It needs to be said that especially this year we’ve become acutely aware of world events in the US and how this story is an uncomfortable foreshadowing of what could repeat itself if we do not pay attention.

SCGC: What was the biggest challenge you faced during this project?
AB & AP: For this particular episode “Black Flag” our heroes had to assassinate a high-ranking German general during a night at the Opera. So it created many musical challenges, ranging from ritzy jazz themes and remixes, operatic rearrangements of Gabriel Fauré, ambient terror, orchestral action, and pure tragedy with a Nazi reprisal attack on innocent citizens. Thanks to the co-ordination of the cast and crew we actually wrote the source music months before to be used as playback on set as well as helping the picture editors set the pace and feel of the show. It was our own temp score but a custom one at that!

SCGC: What was your favourite part about working on this project?
AB & AP: Collaborating with the show creators Stephanie Morgenstern and Mark Ellis, as well as the producers, editors and sound team has been a true joy. We are just finishing Season 3, the final season and are feeling very nostalgic. We are really going to miss this show. We’ve rarely had so many people onside with a clear vision of what the show needs. We get to have many face to face meetings that are energizing, respectful and challenging. Of course we get notes and revisions but we’re also allowed input and discussion on what we feel is right for the show. It’s quite liberating and we think that comes through in the music.

SCGC: Describe the process of developing the “sound” of the score and choosing instrumentation.
AB & AP: The budget only allows for a couple of live players but we use them where it makes sense. We’ve worked with cellist Kirk Starkey, singers Karen Leblanc and Shira Zionce, as well as trumpet player Chase Sanborn, drummer John Obercein, and accordion player Tom Szczesniak.

The sound of the show walks the line between traditional and modern. Besides a large array of strings and pad textures, we have also found some solo colours that lean more towards ethnic or even very synthetic. An early Ondes Martenot sound as well as many Dulcimer sounds, guitar techniques and ambient piano varieties are working very well even though we’re portraying Nazi Germany in the 1940’s.

….And the meaner the Nazi’s get the higher we turn up the distortion on the guitars!

Have a listed to some of the music from the nominated series X-Company:
Musical Examples, Amin:  http://aminbhatia.com/music/
Music Examples Ari: http://www.arimusic.com/samples/x-company/

Congratulations to Todor Kobakov and Steve London for their Canadian Screen Award for “Born To Be Blue”!