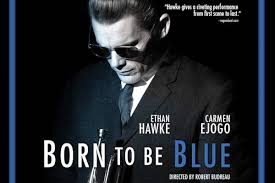 Achievement in Music: Original Score – Born to Be Blue

“Born to Be Blue” is a musical biography that portrays the life of jazz musician Chet Baker during the 60s. Masterfully played by Ethan Hawke, we follow the life of the jazz legend and his many highs and lows during his career.

SCGC: Tell us about the collaboration. Was it difficult to score the film with two other composers?
SL: The writing process on “Born to Be Blue” was quite different than other films I’ve worked on.  This was mainly because there was so much existing jazz music to start but also because David Braid and Todor Kobakov also co-composed music for the film.  I think the collaborative musical atmosphere was great and it really let one become immersed and influenced by the others.  I can certainly say that ideas from Chet’s songs and ideas that David and Todor co-composed gave me some great inspiration with my composing.  However, assembling all the various musical pieces of the puzzle together to make a cohesive and well-shaped musical filmscape was a real challenge for Robert Budreau, the director.

SCGC: How much input did Robert Budreau, the director, provide?
TK: Rob had a vision very early on and we experimented a lot before we got to it. Steven and David did the same and at the end we just mixed it all together. We were able to have the music weave in and out of Chet’s music without feeling too “scorry”.

SCGC: What was the biggest challenge you faced during this project?
TK: Having the score resemble Chet’s Music but not be jazz and without a trumpet was a big challenge.

SL: In terms of the overall concept of the score, the on-going score discussion was that the score shouldn’t be straight jazz since the film already had a lot of jazz music in it.  The score needed to be different enough from the film’s jazz; it had to find a way to bridge the jazz and score realms seamlessly without leaning too much one way or the other.  Using the concept of the persona of Chet himself seemed to provide a good path to facing that challenge.

SCGC: Describe the process of developing the “sound” of the score.
TK: I had written some themes on the piano but it just didn’t work as an instrument for the score. One day I was at my friend Ian Lefeuvre’s studio in town and he was showing me this cool guitar pedal he had just gotten. I borrowed it and played my Rhodes through it and that was it! I also used a stripped down drum kit played by Simon Miminis, upright bass by John Meyer and some bolts to scratch the strings of the piano with (imitating that heroin sensation).

SL: On-stage, Chet had his voice and his trumpet to represent who he was, both personally and musically.  But off-stage, which is really where the score focused upon, I felt like Chet needed an instrument to represent his sadness, yearning and pain along with his ambition, drive and determination.  Todor also felt the same.  This instrument also needed to speak to both worlds of jazz and score so Todor chose the Rhodes as the best representation of this for his thematic material and I chose a solo clarinet for mine.  To me, the clarinet was what I felt the perfect representation of “off-stage” Chet; the real Chet.  The clarinet is an amazingly versatile and dynamic instrument: it can be intimate and warm, melancholy and mournful, bright and strident, jazzy or straight.  I felt that it really spoke to Chet’s character.


SCGC: How was working on this project meaningful to you?
TK: I grew up listening to Chet and to be able to work on a movie about him was a dream gig!

Have a listen to select cues from the film “Born To Be Blue: https://soundcloud.com/steve-london/sets/born-to-be-blue-selected-score-soundtrack-cues

Congratulations to SCGC member Geoff Bennett nominated for a CSA Award for “Moose: A Year in the Life of a Twig Eater”