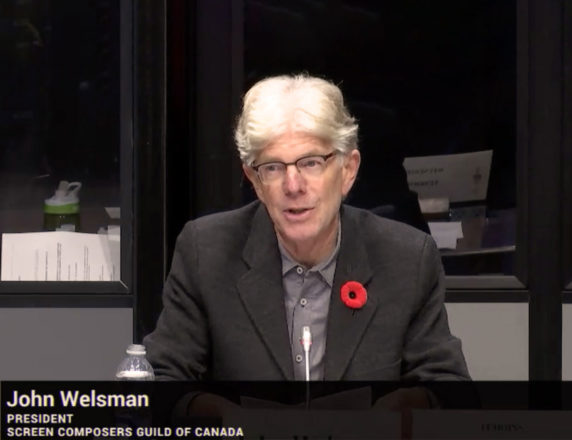 SCGC president John Welsman appeared at the Senate of Canada in Ottawa yesterday to represent guild members before the committee reviewing Bill C-11; the online broadcasting act. Participating in the two hour session, he explained SCGC’s priorities to the committee and answered a number of senators’ questions regarding the technical and in-practice definitions of “Canadian content”.

Referring to the senators’ recent discussions with Netflix, Welsman recalled the streaming organization’s statement that “it’s about copyright” and explained how this is a synonym for ownership. Copyright defines who owns the right to be compensated for future uses of that work and so creators being forced to give up this right as a condition of engagement is especially problematic today.

“The global content giants are […] producing here because of generous tax credits, a favorable exchange rate and, most importantly, our world-class creators. Writers, directors, designers, actors and composers who became world class because of the points-based system focused on Canadian creators,” said Welsman. “Bill C-11 is a once-in-a-generation opportunity to underscore that Canadian culture and Canadian sovereignty mean more than foreign companies deciding what is ‘Canadian enough’ when applying for tax credits.”