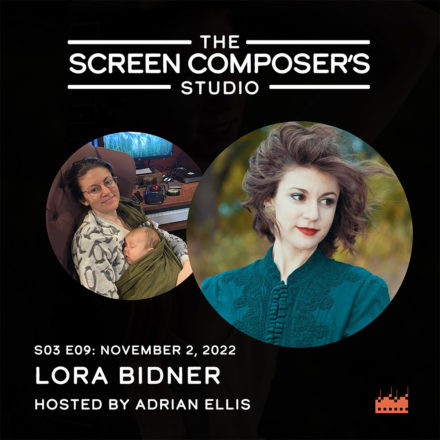 Ottawa born Lora Bidner combines her background as a singer-songwriter multi-instrumentalist as well as affinity for folklore in her music for the screen, which includes the BBC/Family Channel series Malory Towers, mini series Hogtown, feature thriller Don’t Click, and Family Channel series Ruby and the Well, which she co-composes with Rob Carli.

The four-time SOCAN Foundation winner completed a Bachelors of Music from Carlton and a Masters of Music Technology from the University of Toronto, and is an artist in her own right, who released the critically acclaimed To The North in 2015 and is currently working on a new album. We talk about how she got her start singing and writing songs, the surprising film score touchstone that we both share as a favorite, the demanding high school program that got her started writing music early, and the winding educational journey where she overcame tremendous obstacles toward a career as a singer-songwriter. In the end, she returned to her first passion – scoring for film and TV.

Since then, Lora graduated from the Canadian Film Center’s Slaight Family Music Lab, where her formidable work ethic helped her meet the intense challenges of that program, preparing her for the real life pressures of being a screen composer.

We talk about the joys and struggles of her recent projects, how she manages the interpersonal aspect, and how folk music and her voice become part of her scores. Lora’s new challenge is as a new parent, where she juggles the demands of motherhood with a busy scoring career. She offers valuable perspective for anyone who is thinking about, or living, in that tricky balance.